Golang is incredibly powerful. Its standard library has so much to offer, but I think other languages have encouraged the use of external libraries for even the most basic tasks. For example, with JavaScript, most inexperienced developers seem to use jQuery to do simple tasks like selecting an element and replacing its contents. When you and I both know jQuery is way overkill for such a task. See my article on Vanilla JS basics.

I believe that in order to be considered an expert in a language, you must at least be able to demonstrate using the core language to achieve your goal. In our current case, HTTP routing. Now to be clear, I don't think you need to write everything from scratch all the time, but you should have a firm grasp on what is available by the core language, and when you are better suited to use an external library. If you are looking for more advanced HTTP routing, then I would suggest using something like gin.

Enough ranting, let's get to it.

I assume you have basic knowledge of the Go language at this point, so if not, it might be worth searching for some entry level basics first. See A Tour of Go.

The accompanying repo for the code produced in this article is located on github.

Here is our basic folder structure for this basic http routing example:

As a starting point our main.go file looks like this:

Now starting at a very basic level, we can leverage the http.HandleFunc method.

It is very simple to use and its signature is easy to understand.

With fmt.Fprint() we can pass an http.ResponseWriter and a message to display. Our browser will now look like this when we visit the /url endpoint. 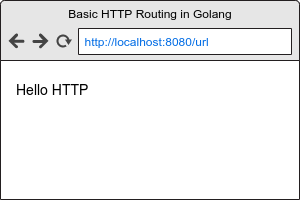 Here is what main.go looks like at this point:

Now we could stop there, as this is a "basic" http routing example, but I think it isn't quite useful as an example yet, until we start to see something slightly more practical.

So let's add a NotFound page when we don't match a pattern in HandleFunc. It's as simple as:

This will match /hello and use the HelloHTTP method to print "Hello HTTP" to the browser. Any other URLs will get caught by the / pattern and be given the http.NotFound response to the browser.

So that works, but I think we can go further.

We need to give ourselves something more specific than the simple contrived /hello endpoint above. So let's assume we are needing to get a user profile. We will use the url /user/:id where :id is an identifier used to get the user profile from our persistance layer (i.e. our database).

We'll start by creating a new method for this GET request called userProfile:

Notice that we get the URL from the req variable and we treat the string returned from req.URL.Path as a byte slice to get everything after the /user/ in the string. Note: this isn't fool proof, /user/10ok would get matched here, and we would be assigning userID to "10ok".

Let's add this new route in our main function:

Note: that this pattern /user/ matches the trailing / so that a call to /user in the browser would return a 404 Not Found.

Ok, so we have introduced some pretty severe holes in the security of our new HTTP router. As mentioned in a note above, treating the req.URL.Path as a byte slice and just taking the last half is a terrible idea. So let's fix this:

Now we can use this method in our code:

For now, I'm calling this "Basic HTTP Routing in Golang" article finished. But I do plan to add more to it as time allows. Additionally, I'd like to create a more advanced article that discusses the ability to respond to not only GET requests, but also POST, PUT, and DELETE HTTP methods. Look for an "Advanced HTTP routing in Golang" article in the future. Thanks for reading this far. I wish you well in your Go endeavors.